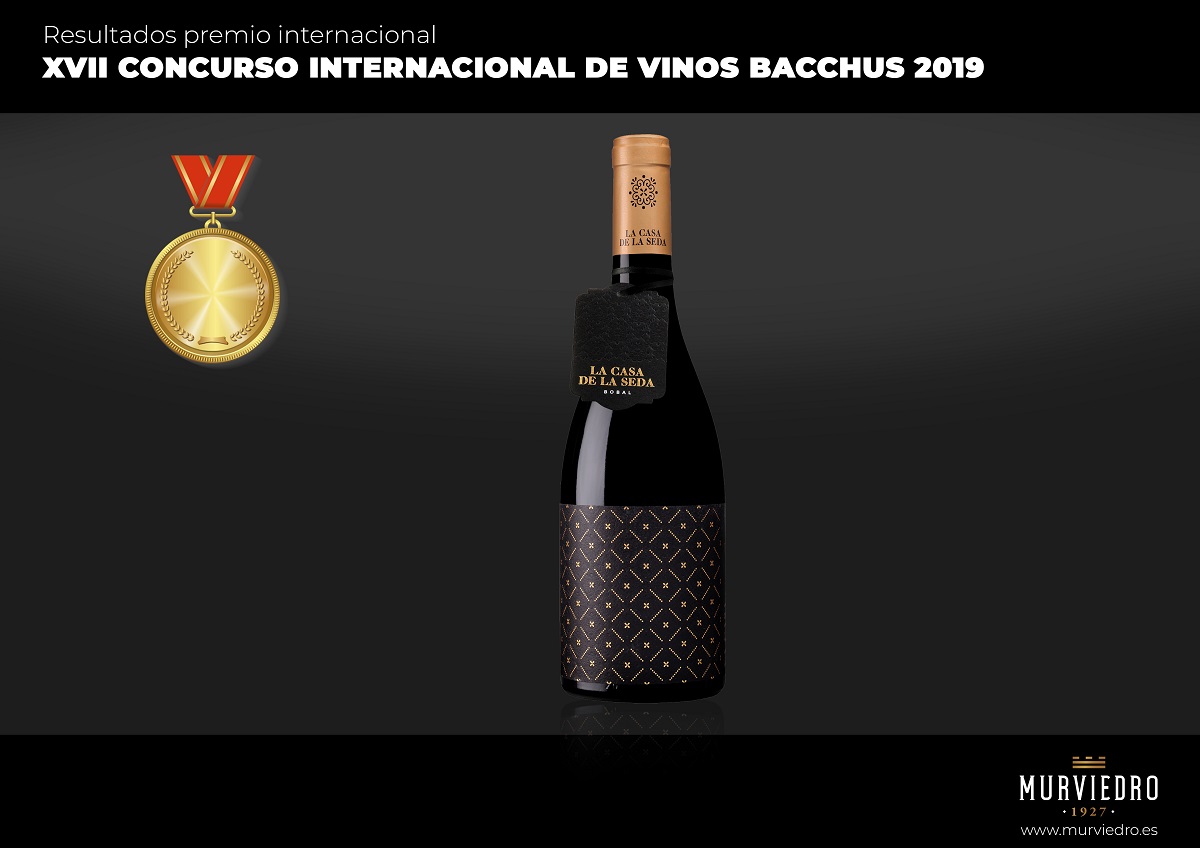 The iconic wine La casa de la Seda, made with Bobal from old vines, is the ONLY GOLD from Utiel-Requena at the Bacchus Awards. What is more, another FIVE of Murviedro’s wines won a SILVER medal.

Valencia, March 15th, 2019.- Bodegas Murviedro is celebrating again after winning a GOLD Medal at the Bacchus awards, with La Casa de la Seda, the wine from the Valencian winery’s Premium range, made with grapes from old vines of the Bobal variety.

An international jury has recognised the quality of La Casa de la Seda by blind tasting, with a Gold Medal at the Bacchus awards.

It is Murviedro’s most pampered wine, whose Bobal grapes from the El Ardal estate grow on almost hundred-year-old vines, planted in 1923, producing less than on kilogram per plant. This authentic piece of winegrowing heritage is cared for and worked in an artisanal way, using organic and biodynamic winegrowing techniques.

La Casa de la Seda’s elaboration is also very particular given that the wine rests in almost equal proportions in a French oak foudre, in a clay jar with a capacity of 37 arrobas, and in an ovoid concrete tank, at Murviedro’s Historic Winery itself in the old district of Requena.

It is to this House-Winery-Museum that such a special wine pays homage with its name and label, as it was here that the silk textiles that made the town famous were woven in the past.

The wine La Casa de la Seda 2017 displays a beautiful purple colour, with bluish hues. Its aroma reveals black fruit and small wild fruit, and recalls aromatic plants and violets. On the palate it is amiable, fresh and broad, with silky tannins and a sensation of ripe fruit, mineral and balanced in its excellent acidity.

Six Masters of Wine among the jury

The Bacchus competition is considered to be the most important international contest held in Spain. It is organised by the Spanish Wine Tasters’ Union (UEC), and is endorsed by the International Organisation of Vine and Wine (OIV) and the World Federation of Major International Wine and Spirits Competitions (VINOFED).

The current round of Bacchus 2019 was celebrated at the Madrid Casino from 7 to 11 March, with the participation of 1,650 wines from 22 producing countries from the five continents. The wines were brought before a jury of 90 tasters, among whom six Masters of Wine could be found.

These six new prizes won by Bodegas Murviedro, the Spanish affiliate of the Schenk Group, at the Bacchus awards join the seven Gold Medals recently won at Mundus Vini and Berliner Wein Trophy, the two most important international contests in the world which are held in Germany.